I decided to make Albuquerque my home base for not one, but two nights.  Since Santa Fe is about an hour and fifteen minutes north of Albuquerque and I would eventually be heading southwest for Arizona, it made sense to head back to Albuquerque for a second night so I could leave from there the following morning.

The first thing I had to do before I could head up to Santa Fe was go out and buy an extra layer to wear!  I knew that there were some long sleeve tees or a sweatshirt somewhere in my car.  But everything was vacuum sealed and stuffed in the car, I didn’t think I could find any even if I tried!  Once I got that finished and grabbed a chai latte at Starbucks I could head towards Santa Fe. 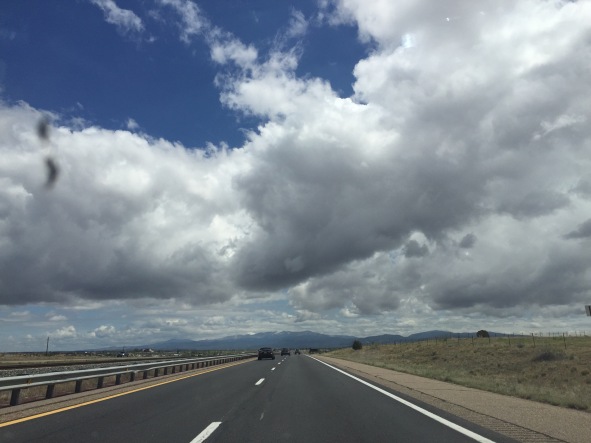 This picture I think hints at the craziness that is the weather in New Mexico.  I felt like I’d be freezing one minute and overheating the next.  Layers were definitely necessary.

Once we got into Santa Fe I thought it would make the most sense to try and go for a bit of a hike first.  I opened up my trusty iPhone to find a hike that wouldn’t be too far or too hard.  I picked one out and headed for where I thought it was.  Key being, thought!  I exited off the freeway, drove down what I thought was the right road (turned out it was, just going in the wrong direction), ended up in a teeny tiny village that was being taken over by a film crew as some kind of set (??), and drove down a road that literally just stopped.  Oh, and did I mention at this point I had no phone service?  It was not the best.  But I turned around and headed back the way I came until I hit the freeway and eventually re-oriented myself.  And finally, we made it to the Sun Mountain Trail.

I have to admit, I thought I would be doing a lot more hiking on this trip than I have so far.  I knew that I wanted to hit up the Museum of Indian Arts and Culture on Museum Hill, and I figured this way I could tucker Remy out and enjoy a few guilt free hours in the museum. 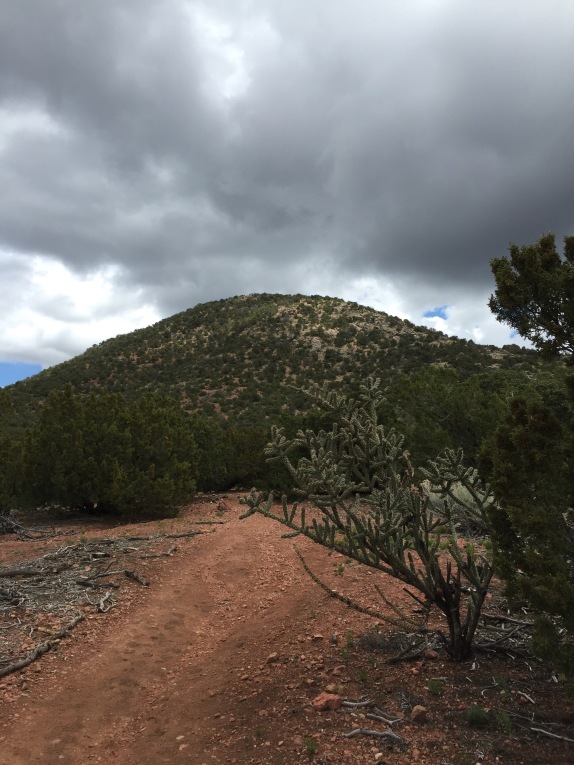 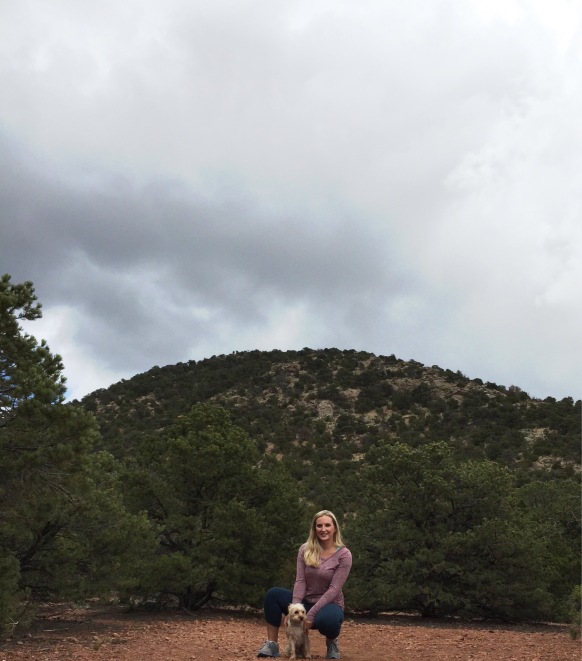 You know this was at the beginning of the hike since my hair still down!

One of my favorite things about this hike was all of the beautiful, honestly kind of shocking, cactus flowers that were in bloom!  I had never seen any before and I was so delighted.  Also they gave me a great excuse to stop on the way up the mountain to grab pictures. 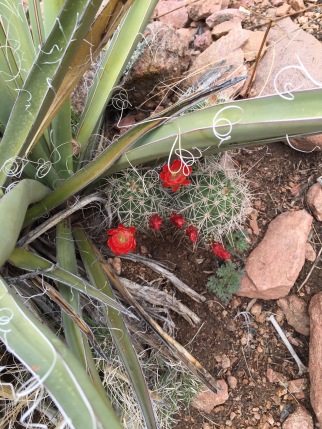 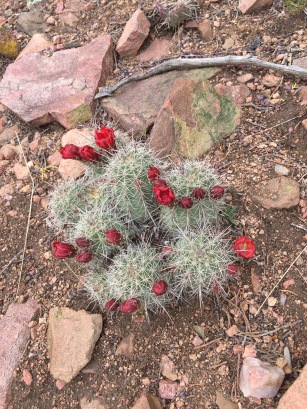 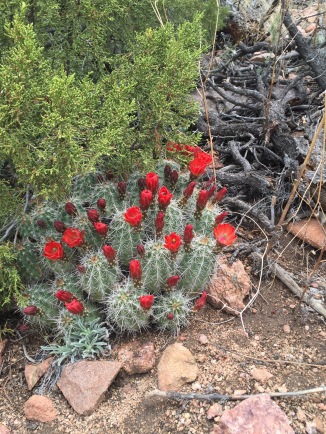 Okay, so here is the embarrassing part:  I picked this hike because I thought it was going to be super easy.  About a quarter of the way up the mountain I thought to myself, “Hmmm, this is a little bit harder than I expected.”  About halfway up the mountain, I was like, “Man, am I glad I have this water!”  About three-quarters of the way up there I thought, “I am going to need to take a break.”  This just happened to perfectly coincide with this older lady whizzing by us with, I kid you not, a walkman! Needless to say, this didn’t make me feel good about myself.    It was until I got back to the hotel and googled the trail to read that the summit elevation was almost 8,000 feet!  To give you some perspective, Columbia’s elevation is only 292 feet. I honestly hadn’t thought about how the higher elevation would effect me, which is kind of dumb.  Luckily, I had water with me, swallowed my pride, slowed down, and took more breaks than I would normally.  Also, I’m stubborn as hell, so turning around and just going back down was not an option. 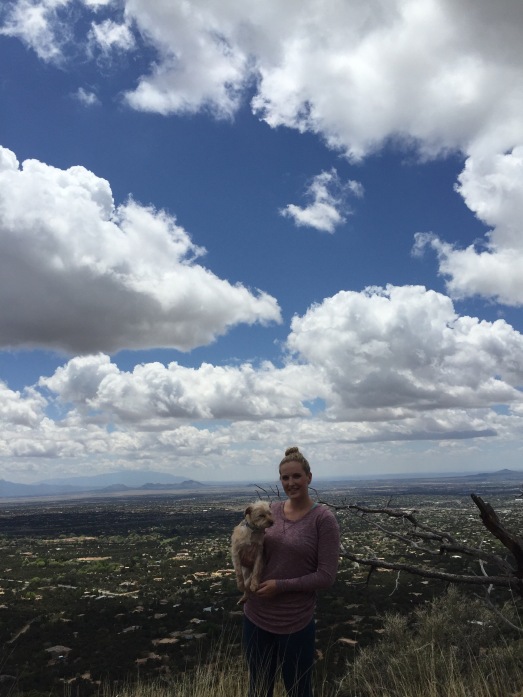 It was a lovely view from the top!  You can tell I was struggling and sweating because my hair got put up in a bun.

Luckily, the way back down from the top of the trail was exponentially easier and we cruised on the path back to where we parked in no time.

Next, I headed to Museum Hill to go to the Museum of Indian Arts and Culture.  Just a side note here, I noticed that many, many, many people, restaurants, shops, galleries, and other institutions use the term “Indian” in New Mexico.  I had always been taught that the correct term was “Native American”, so that is what I’ll use but I honestly don’t know what the “right” descriptor is… or even if there is one!

I’m sorry to say that they didn’t allow photography in the museum, but there was some beautiful sculptures in the courtyard. 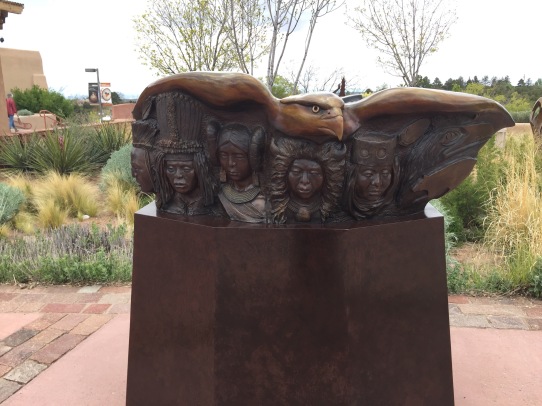 The museum gave a pretty good overview, including history, music, spirituality, geography, etc.  My absolute favorite part though was being able to see some of the handmade jewelry and fashion on display, some dating back over a hundred years.

My visit to the museum also just so happened to coincide with an awesome pottery demonstration by a potter from the Acoma Pueblo.  Traditional pottery in Native American culture is done through the use of “coiling” instead of with a wheel.  So, potters add coils of clay and build upon them to create a pot instead of shaping it with their hands on a moving wheel.  It was awesome to watch this potter in action, hear his stories about his mother teaching him to make pottery, and learn little tidbits of his culture.

A couple more sculpture from outside: 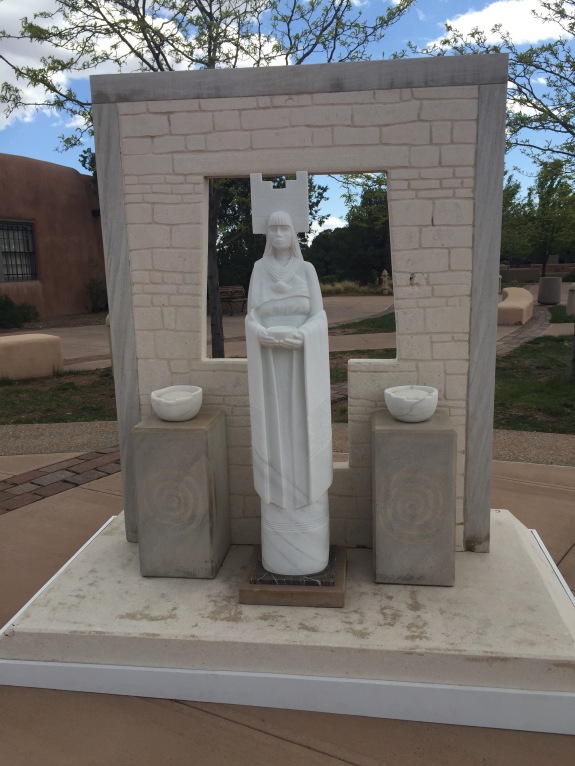 I then headed down to the gallery district to ogle some art I definitely couldn’t afford! 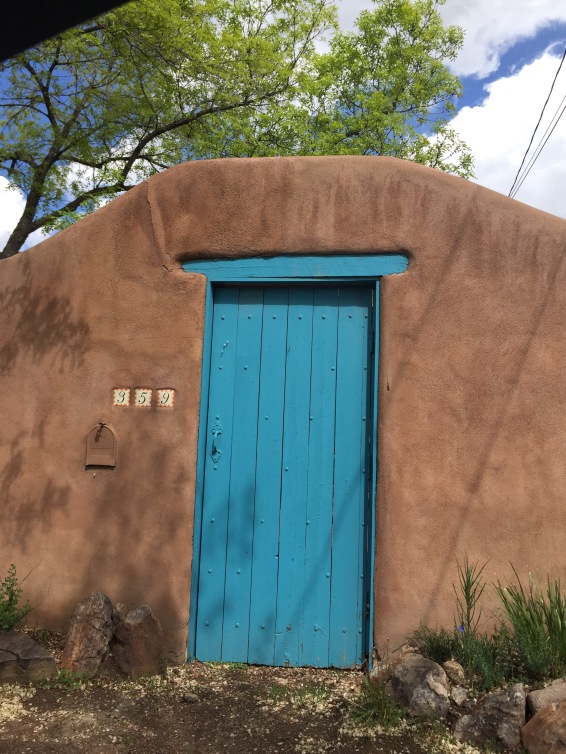 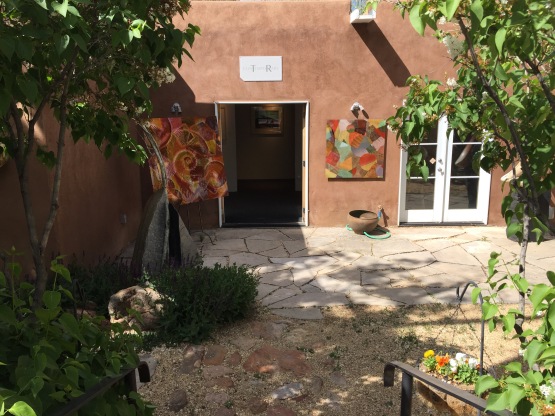 There’s definitely a lot of cohesion when it comes to the architecture of Santa Fe.  I thought that the city just happened to grow up like that, but I found out later that actually any new construction or renovations have to fit within that kind of a “Pueblo” aesthetic.

While I was walking down the district, I popped into this amazing shop, Nathalie.  While there, I got to chatting with the gals working in the shop, they asked me a lot of questions about my trip, why I was doing it, how it was going etc.  One of the ladies said something that really stuck with me.  She said that when I got to the place where I was supposed to be, I would “just know”.  That was an incredibly comforting thought, especially for someone like me that has lived quite a few places!

Next, I headed down to the Plaza in downtown Santa Fe.  There is a lot of history here, including a very old Palace of the Governors and Cathedral. 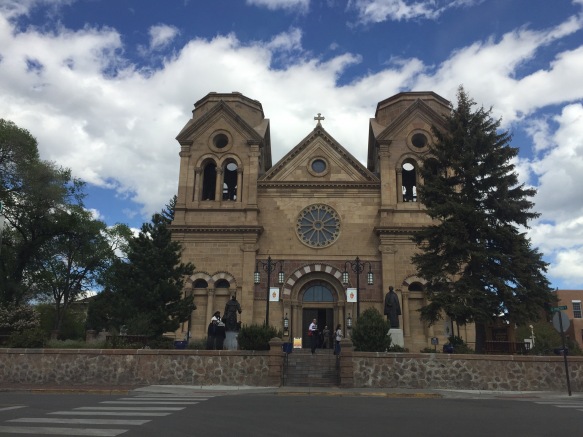 Santa Fe is the oldest capital city in the US, and has been a part of Spain, Mexico, and the United States. 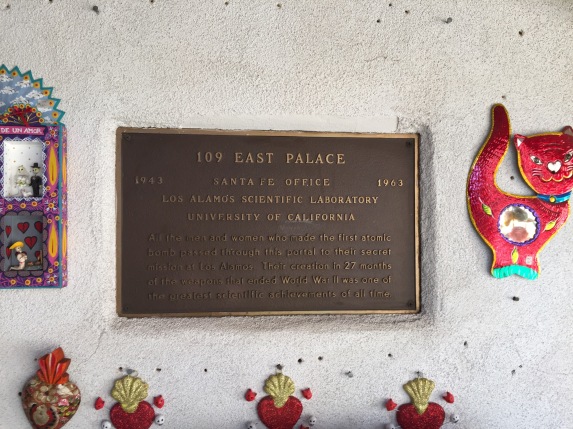 The plaza definitely felt very Spanish.  And I have kind of mixed feelings of the glorification of Spanish rule in New Mexico, because it led to a lot of terrible (like really horrible genocide level) treatment of the indigenous people.

One of my favorite moments of the day was happening upon these two guys singing some Native American songs/hymns/chants (sorry I don’t know the correct way to identify them).  It felt so Santa Fe! 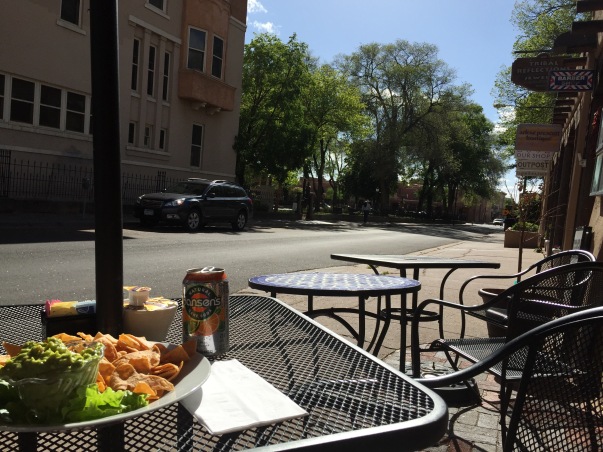 I grabbed a quick snack in the early evening sunshine and headed back to Albuquerque.

Low: Getting passed by an old lady while hiking.