The night I got into Austin, I had met up with an old friend from high school and her boyfriend on Rainey Street (a super cool area of Austin with lots of restaurants, bars, food trucks and people walking around).  However, by the time I got back to my hotel room it was super late and no chance to see anything else in Austin.  So when I woke up the next morning, I knew I’d have to book it around town.

My first stop was the Texas State Capitol.  The building itself is huge!  It definitely felt like the biggest state capitol building I had seen (although that might just be some sort of Everything’s Bigger in Texas mentality creeping into my perception).  Apparently, to pay for the building, the government gave the builders something like 3 million acres of land.  If there is anything Texas has it’s a lot of land. 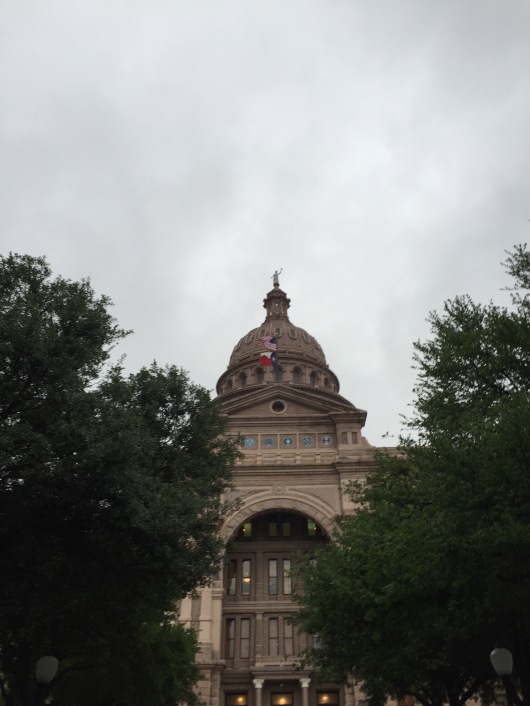 There were lots of people walking around the grounds, from tourists to legislators, but again, it wasn’t as crowded as I thought it’d be.  It was a Monday, so that probably had something to do with it. 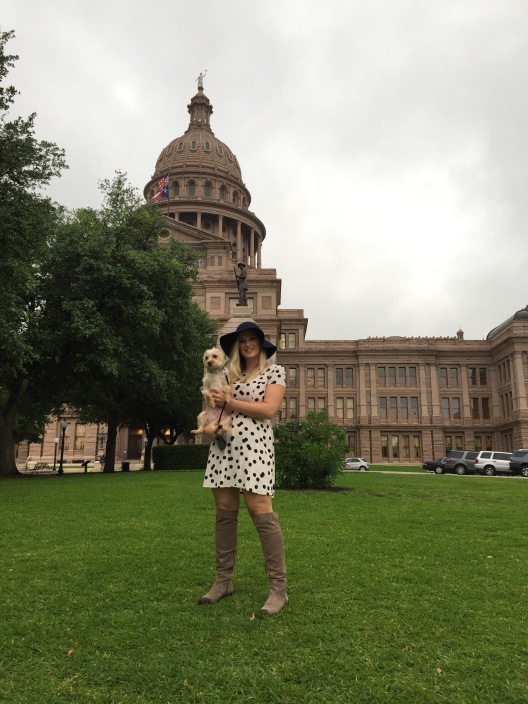 Remy and I stopped for a few pictures, and he loved running around on all the grass!

Right after taking this picture though, we were caught in a sudden and very powerful thunderstorm!  I had known that there was a chance of rain (hence the hat), but we had to book it back to the car and still got pretty drenched.

I often wonder what is going through Remy’s mind as we go on these little excursions, but I’m pretty sure he just thinks I’m crazy.  This time around, he was certainly not pleased with what I had put him through.

Since the downpour meant we needed to find something inside to do, I opened up my trusty TripAdvisor app and looked for options.  The LBJ Presidential Museum and Library was one of the top attractions and so we decided to go for it.

Whenever I’ve been asked who my favorite president is, after you know the obvious ones like Washington and Lincoln, I usually say LBJ.  He was a freaking character y’all!  Have you ever heard the stories about him talking to a legislator and he would go into the bathroom, leave the door open and just keep the conversation going?  (Side note, I wonder if that’s where Clair Underwood got the idea from).  He was at the very least memorable, which is more than I can say for, like, Rutherford B. Hayes.

The museum had several different sections.  There were timelines, audio recordings of LBJ’s phone conversations with people like MLK, lots of trinkets and memorabilia (campaign posters and pins, old school reports, etc).  But one of my favorite parts of the museum was the recreation of LBJ’s and Lady Bird’s offices.  How sweet and colorful is Lady Bird’s decor? 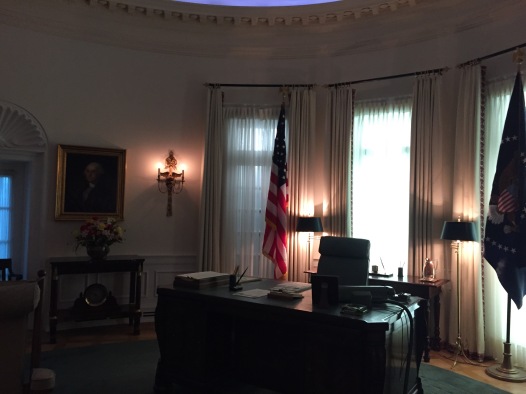 I also liked walking through the recreation of the Oval Office, with a lot of original furnishings from LBJ’s time there. 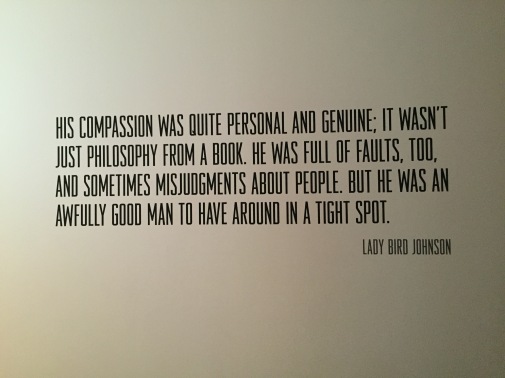 I’ve always gotten the sense that people from LBJ’s generation perhaps don’t like him very much, and I’m sure that has a lot to do with his involvement and his escalation of the US’s involvement in Vietnam.  But I also think we have to respect the many things that he did accomplish: legislation furthering Civil Rights, Medicaid/Medicare, immigration reform, space exploration, and a focus on the rural and poor.

After leaving the LBJ museum, a got a chance to quickly catch up with two friends at the Facebook offices in Austin.  Which I loved!  It has been so amazing the people I’ve been able to connect/reconnect with while on this trip!

I met up with a friend and local Austin-ite for lunch.  When he asked me what I was in the mood for, I immediately replied, “Mexican!! Not barbecue sorry!”  I feel like I may have had my share of barbecue living in the South and I’m okay not having anymore for a while.  We had an amazing lunch at Guero’s, which I highly recommend.  It’s on South Congress, which is a fun little neighborhood with restaurants, cafes, and quirky vintage stores.  We also stopped in Allen Boots which I take to be kind of an Austin institution to browse their huge selection of boots.  I could have bought probably 15 pairs. 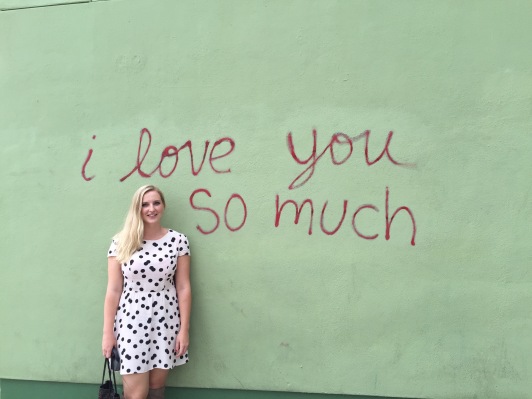 South Congress is also home to Jo’s Coffee, probably best known for their “I love you so much” wall.  It was adorable and felt undeniably authentic.  The story goes that when the owner of Jo’s Coffee was having a bad day, her girlfriend took a can of spray paint to the wall on the corner to leave a her a little love note.  How can you not love that?

I had originally wanted to go to Barton Springs Pool (it’s one of those quintessentially Austin things to do).  Unfortunately because of all the rain, it was closed.  Still beautiful nonetheless.

The last thing I did in Austin was head to the Barton Creek Greenbelt.  This was touted by my tour guide/friend as his favorite thing to do in Austin.  I’m so sorry to say that I didn’t take any pictures, but I think that’s how you know I was having a really good time.  The Greenbelt does not feel like it’s anywhere near a very metropolitan city.  If anything, it feels like you are out in the middle of nowhere.  There are lots of trails to hike on.

My favorite thing about the Greenbelt though, was that you could wade/swim in the creek.  Did I have my bathing suit on?  No.  Did I contemplate jumping in with just my undies on?  Absolutely.  (Don’t worry I didn’t.)  The water was insanely refreshing.  We crossed the very high (because of the rain) creek over to to a rock plateau on the other side.  Not going to lie, I was not sure I was going to make it.  And, I definitely wasn’t in the right clothes for such an excursion but I sucked it up.  Once on the other side, we just sat, chatted, enjoyed the view, weather and beautiful scenery.

I was so sad to have to leave Austin.  There are some towns that I wake up in and say, “Well, that was lovely, and I’m glad to have met you but I’m ready to go now.”  I think I have a little crush on Austin and I can’t wait to go back!

Unfortunately, my drive to Marfa was going to take me over 6 hours to complete and I had to hit the road.  The drive was miserable.  After I passed Fredericksburg, I basically left civilization behind for the next several hours.  Which is how I ended up eating McDonald’s for dinner, because that was literally my only option.

I did treat myself to a McFlurry because, hello! I deserved it.   The drive to Marfa took me so long, I actually got a call from the reception desk at Hotel Paisano asking me if I’d make it before 10 because the desk closed then.  Sadly, I didn’t make it in until about 11:30.  The receptionist actually taped an envelope with my key to the lobby doors so I could get in.  In any other city, there’s no way this could happen but Marfa is a teeny tiny town.  I hauled my stuff out of the car and was never happier to see a bed in my whole life.  Exploring Marfa would have to wait.

High: The Greenbelt in Austin

Low: Driving to Marfa and only being able to pick up 2 radio stations