Waking up on Friday morning in Mobile I was so excited to head to the beach!  I thought there was easier true beach access in Mobile proper, but while I could get to the water it seemed easiest to head a little outside the city to take my shoes off and walk on the sand.  Oh, also, have I mentioned that the dog love of my life, Remy makes things way more complicated?  There are tons of beaches on the Gulf Coast that I’m sure would be lovely, but sadly, no dogs allowed.

So after a little bit of Googling, Remy and I headed towards Dauphin Island.  The road from Mobile is exactly what you would expect a coastal southern highway to look like.  I loved all the colorful buildings, shops, and homes!

I don’t know why I’ve never heard of this adorable town before.  What a perfect beach getaway! 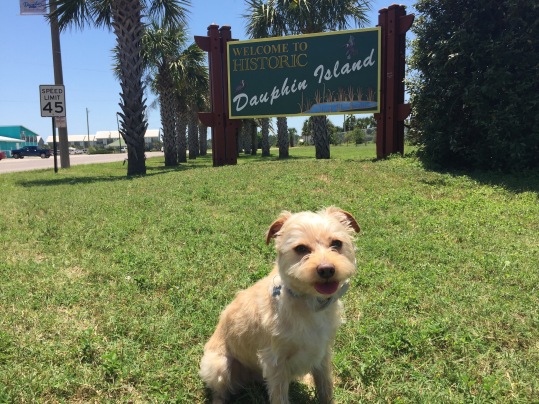 After driving around the island for a little while, we made it to the a beach on the south side of the island.

I’m afraid these pictures really don’t do the island justice.  My favorite part about this little town are the incredible beaches that seem to jut out beyond the island.  There are people who have walked out half a mile on these sand bars, or will take their little boats out and set up their rainbow umbrellas, towels, coolers, etc and spend the day there.

I loved that Dauphin Island seemed everything that a beach town should be, no crazy bars, flashing neon lights, or vendors aggressively hawking trinkets. 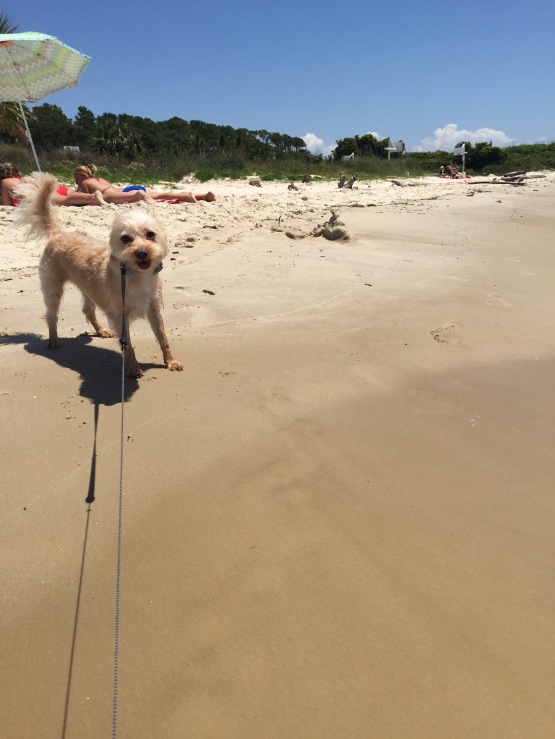 Remy and I spent some time walking down the beach.  I took my shoes off and waded ankle deep in the water.  It was just the right temperature.  The sun shone brightly and as I walked down the shore, I caught snippets of the country music playing on sunbathers’ radios.  It was perfect.

After doing my best to get the sand off myself and my pup.  We headed back to the car.  I decided to drive back along the coast before heading up north to Jackson.  I headed for Biloxi.  This is what my route looked like: 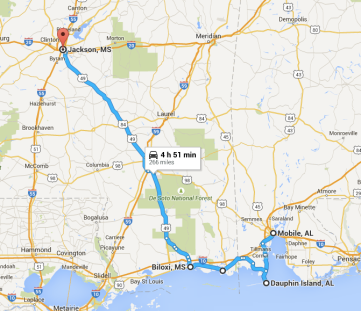 Since it was getting to the afternoon, I decided to stop for lunch somewhere off the small highway I was driving.  Thanks to trusty Yelp, I found myself at this lovely establishment. 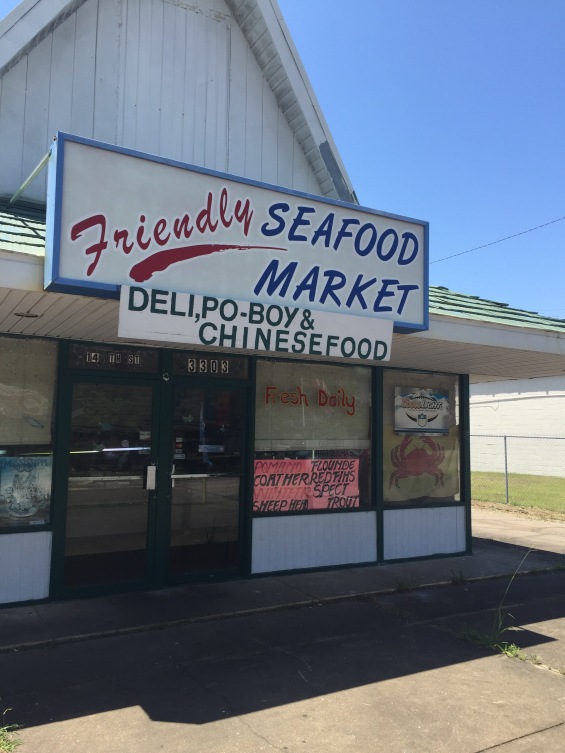 You know how they say, don’t judge a book by it’s cover?  I’m pretty sure places like this are the reason why they say that.

I ordered a Shrimp Po Boy.  In case you’ve never had a po boy before, it’s basically a sub sandwich, and you can get it with lots of different things, but in my opinion if you are going to get it, you should definitely get it with shrimp. Oh, and did I mention the shrimp is fried?  The diet starts after the road trip!

After finishing half of my po boy, I tucked it away for later and continued down the coast.  I drove through Biloxi parallel to the coast.  There are historical markers all along the road of homes and buildings that used to stand there but have been lost over time.  I saw Jefferson Davis’ house once again. I soaked up the last bit of sunshine and salt air before heading north.

My drive to Jackson was kind of annoying, but bearable.  You might be wondering how I pass the time, spending so much of it in the car.  I have not gotten to the point where I’m listening to the audiobooks on my phone just yet.  I try and catch NPR or local talk shows where I can because I feel like that helps me stay entertained.  True story, I absolutely love to listen to conservative talk radio in the car.  Driving up Highway 49 though, I basically couldn’t find anything aside from Christian gospel and Christian stations of preachers preaching.  Tough.

When I got to Jackson, I was kind of exhausted.  I’ve been making it a goal to try and go out to dinner when I can.  So began my search for a place that I could sit outside with Remy and enjoy a meal.  BringFido.com has been a great resource for me as I’ve struggled to accommodate having my dog with me.  In Jackson, MS there were exactly two results for restaurants.  Sonic Drive In…. two locations.  So, I turned to Yelp and looked for outdoor patio.  I called a few restaurants to see if they’d let me bring Remy.  I feel like I really got my pitch down quickly, “Hi! I’m calling to see if you allow dogs on your patio?  I have a small terrier mix who can sit on my lap/stay under the table/basically be invisible.”  After several strikeouts, I called The Manship, and the hostess was so sweet and told me to go ahead and bring Remy with me.

Do you know what it’s like when you move to a new town, or a new neighborhood and you feel like you have no idea where you are or where anything else is?  And it’s super disorienting?  Going on this road trip is like that all.  the.  time.  It can be incredibly challenging and I actually don’t think I would have made it out of South Carolina if it wasn’t for the magical powers of my iPhone.  So after driving in circles trying to find the restaurant, finally locating it, not being able to find parking, circling some more and parking the car.  We had finally made it.

I’ve mentioned before how eating dinner alone is kind of a sad endeavor.  Luckily, when my waiter at the Manship heard I was traveling cross country solo came by really frequently to chat, and ask me questions about my trip, and tell me about living in Jackson.

As I was leaving the restaurant, I was stopped by this man sitting on a bench with a friend, who asked if he could pet Remy.  I always feel terrible when people (especially kids) ask me to pet Remy.  Remy really doesn’t like strangers, and basically just tries to run and hide from them when they try and give him some loving.  Anyway, this guy Chris and I struck up a conversation.  The greatest thing about it was, he LOVED Jackson.  He loved it so much that it was actually palpable in everything he said about it.  I asked him what I should do tomorrow morning before I left, and he told me I should go to Lemuria Books and go buy a book called Mississippi Sissy.  He told me how great Jackson, he told me about this old music club where you would have to go into the basement of the building to listen to the music, and when you wanted a drink you’d have to walk up and out of a rickety stair case, go across the street and order from a lady who was serving them out of her window.  He told me that as an openly gay man, he’d never faced any kind of discrimination or bigotry and that he loved it here.  Dear Mayor of Jackson, if you are reading this, you should probably hire Chris as some sort of city ambassador.

This was one of my favorite moments of my road trip so far, and I hope there are many, many more of them.

High: Meeting Chris outside of The Manship

Low: Leaving Remy alone in the car with half of my shrimp po boy and coming back to find it completely demolished.  He left me the lettuce though!